skip to main | skip to sidebar

Time to take Fingelton down from the Walls of Leinster House 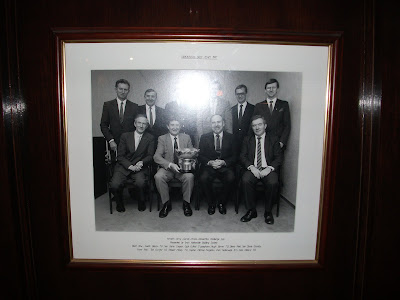 One of the first pictures members of the public will see on a visit to Leinster House is a portrait of Michael Collins. Others such as Mary McAleese and Countess Markievicz are also on display along with the busts of the 1916 Leaders which are to be seen all around the house.

There is a photograph of John F Kennedy addressing the Dáil in one of the corridors and another of Nelson Mandela and there are many more pictures and works of art from past and present for visitors to enjoy.

But what the visitors don’t see is hidden away in a part of Leinster House that members of the public are strictly forbidden to enter.

The Dáil members’ bar is not somewhere I frequent. It is a place that represents all that is wrong with Irish politics. It is elite, exclusive and secretive. While showing one of my new Dáil colleagues around Leinster House this week I decided to show him this den of secrecy. While I have passed through it before I have never actually stood back and taken it all in. When I did I was shocked by what I saw.

Tucked away in a corner of this exclusive bar is a photograph of none other than Michael Fingleton surrounded by a bunch of current and former Fianna Fáil and Fine Gael TDs and Senators.

The photograph is of a group which took part in a golf outing and hangs proudly to the left of a photo of An Taoiseach Enda Kenny, and many other Oireachtas members.

This is a man who was at the centre of the Golden Circle, who colluded with Anglo Irish Bank to hide the extent of its bad loans in order that the Irish people would bail out that bank and who walked away with a €1 million golden handshake.

The neighbouring pictures depict famous horses jumping hurdles in their finest hours, many of them I assume owned or part owned by former politicians. This is what lurks behind the doors of the Dáil members’ bar where some TD’s go to escape the public and the press and enjoy a quiet pint. The word private is placed in large writing above the door.

How ironic that at a time when the Dáil is consumed with dealing with the legacy of people like Michael Fingleton and the economic mess they created that his picture still hangs proudly in the bar where some TDs and Senators socialise.

It is well past time that this picture was taken down from its perch and placed in the dustbin of history once and for all.

And, while I’m at it, the very notion of a private bar in a house that is meant to represent all of the people is outdated and part of the old way. Time too for that to go!
Posted by Pearse Doherty at 5:00 PM

Pearse Doherty
I am married to Róisín and have three Great boys Pádraig, Colm and Rónan. Was elected to An Seanad in 2007 was elected to the Dáil in Nov 2010 and again in Feb 2011.